Sportswear company Adidas has teamed up with Soul Cap to launch a swim cap for people with afro or voluminous hair, following FINA’s decision to reverse its controversial ban on its use in professional competitions.

Made from 100% silicone, the Adidas Soul cap is larger than traditional swim caps, meaning people with long, voluminous hairstyles, including dreadlocks, afros and braids, can wear it comfortably .

Available in a minty shade that Adidas describes as “linen green”, the larger-than-usual cap has been designed to provide a snug fit and seal around the wearer’s hair so it stays dry while swimming.

The adult version is available in sizes from regular to XXL, which is 35.5 centimeters long and has an opening with a circumference of 23 centimeters.

“We’re thrilled to partner with Soul Cap to tackle one of swimming’s biggest hurdles together: accessibility,” the brand said.

“The Adidas x Soul Cap partnership aims to promote greater diversity and inclusion in the world of swimming, helping to break down social barriers in the sport,” he continued.

“We are committed to making water a more fun, inclusive and social space and this partnership is another step forward in making that ambition a reality for all.” 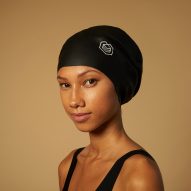 Soul Cap was created by British entrepreneurs Michael Chapman and Toks Ahmed-Salawudeen after meeting an Afro-haired woman who struggled to put on her swimming cap.

“Each swimmer wore the same size swim cap, regardless of their hairstyle or how much hair had to be tucked in, which often resulted in people struggling with ill-fitting caps,” Soul Cap explained.

“This observation led to Soul Cap, a company that makes swim caps designed with more room at the crown for those with long or voluminous hair.”

The cap grabbed headlines and sparked a global debate about diversity in swimming after it was banned from the Tokyo 2020 Olympics.

The ensuing backlash prompted swimming’s governing body, the International Swimming Federation (FINA), to reconsider its decision to ban Soul Cap, resulting in the ban being lifted on Friday, September 2, 2022. .

The move means swimmers will now be able to wear the caps, including the Adidas Soul Cap version, at all levels of the sport.

Nike has created a single-layer stretch hijab called Pro Hijab that could “change the face of sports for Muslim girls” while Reebok has launched Fit to Fit, a collection of adaptive sneakers that can be easily put on and taken off, as part of the Mark. move towards a more accessible footwear offer.

Images are courtesy of Adidas.