Tony Braniff, Barry Myers, Andrew Cochrane, Robert Bartup, John Moon, Peter Bell, John Waterhouse and Mary Kapadia all enrolled in a four-year business studies course at DMU – or Leicester Polytechnic as it was then called. – in 1971.

Chris Kittle, a DMU alumnus, who studied for a shoe design degree between 1972 and 1975, also joined the group’s reunion with David Botley, Julian Scannell and John Schofield, all of whom graduated from three years surveying the building in 1975.

Starting their afternoon catching up at Trinity House, the alumni enjoyed a tour of the campus and a visit to the university archives.

The size and structure of the university’s campus is arguably the most notable change to have taken place in the past half century. Years of redevelopment, including The Yard, which opened at the start of the 21/22 academic year, has helped transform DMU into a vibrant and modern center. 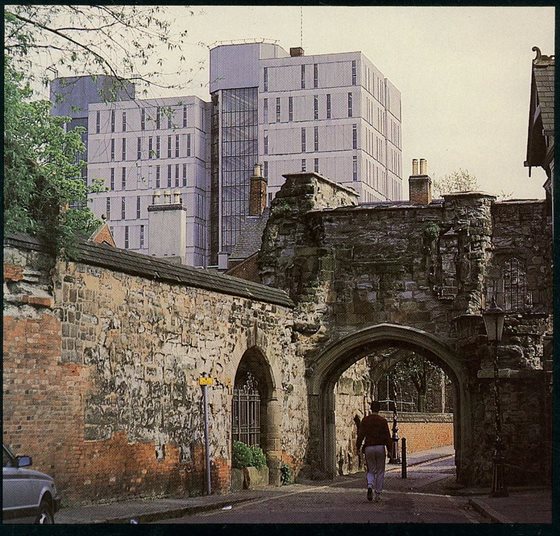 Gone are the tall towers of the James Went Building – where many business skills were taught, demolished in 2004 – and in its place stands the impressive Hugh Aston Building. Gone are also the William Rowlett Hall of Residence, the first hall of the university residence where many alumni would have lived at least during their first year of study.

For some, including retired entrepreneur Tony Braniff, who organized the event, the reunion was the first time they had seen their classmates in over 45 years.

Tony, Peter Bell and Andy Cochrane shared their memories of Leicester Polytechnic, how to study how their careers have shaped and what it was like to be back on campus after all this time. 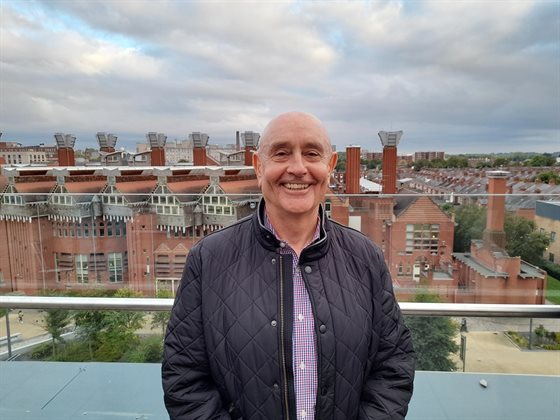 Hi Tony. What prompted you to leave Lichfield and study at Leicester Polytechnic?

I knew I wanted to work in business from an early age and figured the best thing I could do was study a general business course. Leicester Poly offered a wide range of modules including accounting, law, IT and sociology, which I knew would launch my career.

What made Leicester Poly stand out the most is the fact that it offers a work-study course. We had two six-month internships between our second and third years, which really helped us understand how a business worked and how concepts like accounting were used in the real world.

What made you come back to see DMU?

Curiosity, above all. I now live in Atlanta, Georgia, and was returning to the UK to see old friends before running the London Marathon. Knowing that I would be here, I decided I wanted to come back and see what had happened to the city and how Leicester Poly had changed.

The idea was to catch up, to think back to the past – some of those people that I haven’t spoken to in 45 years. I contacted people on Facebook, and from there it grew as people suggested inviting other classmates.

Everything has changed since your last visit almost 50 years ago, what is the biggest noticeable change?

The change is phenomenal. There is a great atmosphere around the place – I am quite envious of the students studying here because I would love to do it all again, however, retirement also has some perks.

Looking around today, student accommodation is much nicer compared to our experience. The old Leicester Poly campus was much smaller, but there was a gym and facilities for five which was all we needed at the time. Now there is so much for the students to do and the facilities are just amazing, especially compared to what we had.

You left Leicester Poly in 1975 and currently live in Atlanta, Georgia, USA. What has happened in the meantime to get you to where you are today?

Most of my career has been spent building software technology companies from scratch and then selling them. I left college and joined a management training program for the automotive components company Joseph Lucas Ltd. I spent two years there, but felt the auto industry was dying and I was planning to join the emerging computer software industry, which I did.

I then worked for an American software company, Comshare, for 10 years selling and marketing business application software for pre-Microsoft Office planning, reporting and budgeting, and worked my way up the ranks. to join the European board of directors. It was a time of significant entrepreneurial opportunity in the industry, so I left with a few colleagues to start our own software company, raising funds from venture capital firms including 3i here in the UK. I went to Atlanta to build the American branch of this business and loved the place so decided to move there.

After a few years we were able to sell ALG Software to a much larger software company, Business Objects – a success for all investors and shareholders. Given this experience, I subsequently became involved in building and setting up other software companies including Profisee Inc., Xpertek in South Africa, and Whoop Inc., all of which had successful releases.

What business advice would you have for DMU students who want to start their own business?

This is a very interesting question. From the top of my head, I have a couple of things:

Be very focused on the business you are creating. Keep it simple and don’t get distracted by anything other than the main reason for the business. Always remember what you are doing, why you are doing it, what problem your business is solving, and why people should want to do business with you.

The second thing, stay in control of the business and don’t give up ownership or stock in the business unless you really have to. Make sure you have the power to make your own decisions. 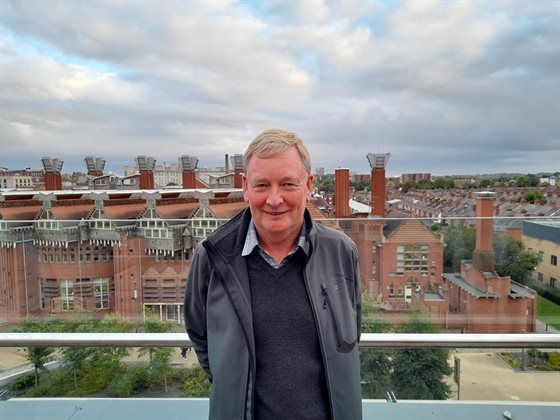 Hi Peter. Were you local to Leicester and why studying in the city appealed to you?

I’m from Norwich so I had never been to Leicester before enrolling in Polytechnic. I didn’t know anything about the city. We didn’t have a lot of specific career paths available to us when I was young, so I wanted to get a general degree in order to gain practical skills. I wasn’t particularly academic and what really appealed to me about Leicester Polytechnic were the two six-month internships.

How far has the university come and what has impressed you the most since returning to DMU and Leicester?

It is sure that it is the brand image. It hits you before you even set foot on campus and it looks very professional. In our time Leicester Poly was hardly a brand, but now you get the feeling that DMU is on a par with the University of Leicester when it comes to facilities and campus. I imagine everyone in Leicester is familiar with both universities now.

The work-study program was obviously a great motivation for you, what did you learn in these internships?

The most important thing he taught you is that a job requires discipline. There is a routine you have to adjust to and if you are willful you can do well in the business world.

In fact, after my second internship I would say I struggled to readjust to studies because it wasn’t as structured. This is often not the case now, as there are a lot of different skills that you learn in college, so you need to be more disciplined in your studies.

What did you do after college?

I was fortunate enough to participate in the United Biscuits graduate program. My first internship as a young boy in his twenties from Norwich was in Glasgow and I was sent to Scotland to cut my teeth in the industry. It was a really eye-opening experience and I learned a lot there before heading back to Leicestershire, this time to Ashby-De-La-Zouch.

I decided I really enjoyed working in the food industry – it was a different challenge. I had a chance at a small bread business called Warburtons. You can say that everything went well at the end. At the time, it was a family organization with only two factories, so I joined them before they became the powerhouse they are today.

I stayed with them for about 30 years and became their COO for a while. During this time, we expanded to 32 locations as the business continued to grow.

In reality, it was more for me to be in the right place at the right time because Warburtons was already on a winner but I was there to see the expansion of the business, and I’m proud to have been. involved in the company for the trip. 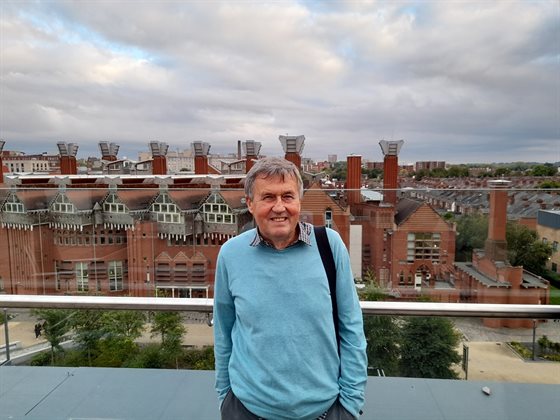 Hello André. What did you like about coming to Leicester Polytechnic?

Initially, I wanted to study geography with economics but it was obvious that I was not going to get the grades. My teacher suggested that I try General Business Studies and when I had the choice between Leicester and Newcastle I chose Leicester.

We were based in the James Went Building, which was basically just two towers roughly where the business school is now. Coming from York, the two tower blocks actually felt pretty exciting and metropolitan to me.

How has the campus changed over the past 50 years?

Well where do you start? I’ve never really been back to this side of town, so there was a lot to take in.

Instantly I thought it looked a lot cleaner and a lot brighter, and like a lot of universities, the campus has diversified a bit. It’s like a small town within a town. There are a lot of very impressive buildings now compared to what we used to study in the 1970s.

Newarke Street was also a small, narrow street, with The Magazine – where a lot of students drank – near the corner – it’s a shame it’s no longer there.

After leaving DMU, ​​what did you do?

Well, most importantly, I married my wife, whom I met at a nightclub at the University of Leicester.

Regarding my career, I got a business management intern position at Western Helicopters, working in the commercial department selling helicopters in India and Pakistan. I got a trip to Pakistan from it, which is always nice.

After three years at Western Helicopters, I realized that it was not in my nature to sit at the desk all day, so I returned to farming in York. I had my own dairy herd on the outskirts of York for about 20 years and then decided to do a National Senior Diploma (HND) in Rural Management.

It was a really good decision, because after I finished the course I got a job with the Yorkshire Wildlife Trust which was a lovely role.